Inspired by the 50s: the leitmotiv that runs through this cocktail proposal, which was coached by Renato "Tato" Giovannoni, one of the most recognized Argentine bartenders of the last decade.
The Alvear Art Hotel came up with this idea to conquer the moment of the weekly after-office.
For the menu, Tato recovered some classic cocktails, such as Geneve (gin, lemon juice, Cointreau, cassis liqueur: a sort of Argentine Cosmopolitan), with which Rodolfo San won the first prize in a contest of the Cointreau brand in 1960.
However, Giovannoni also produced cocktails of his own. An example is the Café Porteño, which reverts the old habit of drinking whiskey next to a coffee cup, a drink of one followed by the other, and it does so in a cocktail that carries scotch, Nespresso coffee and an intense cocoa bitter.
A golden journey to the best time of the Argentine cocktails. That past that is present today. That is launched with its flavors and culture towards the future. 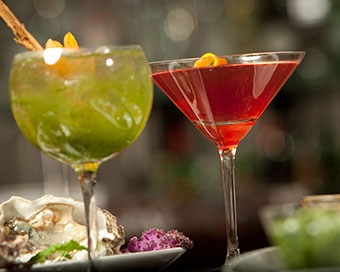